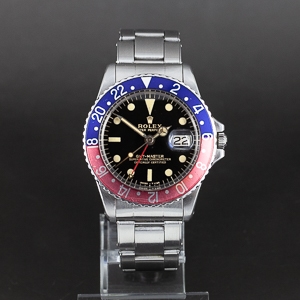 The term gilt in vintage watches generally means that the texts and numbers on the dial are mainly golden in color.

Rolex used gilt dials especially in its Submariner, GMT and Explorer models in 19621967. The manufacturing process of gilt dials was significantly different from the production of normal pad-printed dials. The process was considerably slower and more complex, which is why it was abandoned relatively quickly.

In the gilt method, a glossy, hard enamel paint coat was applied on the backing metal of the dial. There were at least two different methods that were used after this step.

In early gilt dials, a negative mask containing the letters and numbers was applied over the black primer. The dial was then etched. After cleaning the dial, the numbers etched on the dial were gilded with gold leaf or silvered with silver leaf. When examined with a microscope, older gilt dials show that the letters have been etched.

In later gilt models, gilding or silvering was done directly on the painted surface without etching. A mask was used in this gilding method as well. The text and numbers on these dials do not show indentations caused by etching. Sometimes, in addition to the gilding, other elements were added to the dial with white paint, such as in the Rolex Submariner gilt underline model.

In both methods, the dial was protected by applying a thick coat of varnish after gilding it. The varnish protected the delicate gold leaf surface and prevented the silvered surface from oxidizing. Luminous mass was applied on top of the varnish by using either the pad-printing method or by manually painting it.

Starting from 1967, Rolex switched to using only the pad-printing method. In pad-printing, the backing metal of the dial is first primed and then painted. Rolex used a matte primer from 1967 to 1983. In 1984, Rolex started using a glossy primer. A printing pad is used to transfer all texts and numbers from the printing plate on to the dials coat of paint. All texts are printed on top of the dials coat of paint. Nearly all manufacturers still use this method.

There were several watch manufacturers besides Rolex that used gilt dials. Gilt dials can be found in the collections of these brands, among others: Zenith, Heuer, Universal, Longines and Omega.