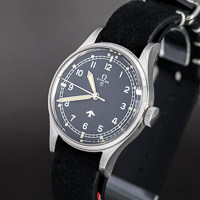 The British RAF (Royal Air Force) aircraft used on bombing flights during World War II could not find their targets accurately enough. The radio beacons used during peacetime had been closed down, and only the dead reckoning method was used. This method relied on landmarks and an accurate flight plan for navigation and used the map, flight speed, distance and compass to find the target. This worked in theory, but not in practice.

The effect of crosswind on the direction of the aircraft could not be taken into account in the calculations, which caused the aircraft to stray from their original course. Afterwards, it has been estimated that more than 95% of the bombs dropped missed their target by more than 5 miles (approx. 8 km).

The airborne map painting radar system 1 was also developed for aircraft during World War II. Placed inside the aircraft, this radar using a 9.5 cm (3 Ghz) frequency made navigation and target recognition easier on the ground, but only over short distances. The radar also caused problems. The 15 kW magnetron on the aircraft’s internal radar generated a magnetic field that interfered with the operation of watches. Because of this, in 1949, the RAF decided to provide pilots and navigators with a new watch model that would be magnetically shielded, accurate, shock-resistant, waterproof and sturdy enough to withstand a sudden change in pressure inside the aircraft. The specification of this watch model was Mil-Spec 6B/542, more commonly known as MK11.

With the help of the MK11 watch, a sextant and an astronomical chart, the exact position of the aircraft could be calculated anywhere. The first watches were ordered from Jaeger LeCoultre and IWC. Watches were later ordered also from other manufacturers, such as Omega. A total of 12 manufacturers were used to supply the watches (the Dirty Dozen). These early 1950s models were named after their level of requirements (6B/542), abandoning the MK markings.

The pictured RAF Omega Broad Arrow 2771-1 pilots watch is from 1953.  The watch has an almost flawless MoD (Ministry of Defense) tritium dial and hands.  The watch houses a manual Omega cal.283 movement. The diameter of the steel case is 37 mm, and the strap is attached to a fixed lug. These watches were intended for use with a NATO canvas/nylon strap or with an adjustable Bonklip steel bracelet. The watch in the photo has an Italian NATO leather strap. The Omega 2771-1 model was the predecessor of the Omega Railmaster model. The Railmaster was introduced in 1957, and it was Omegas first magnetically shielded watch for civilian use.