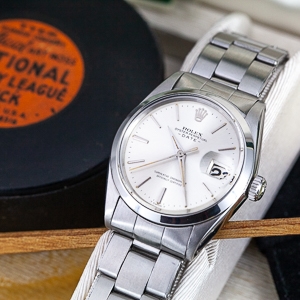 His playing career ended in a national match in Poland in 1953 when an opposing player fell on him, breaking his tibia. After his glorious playing career, Honkavaara continued as a top-level coach in Finland. He coached Ilves to three Finnish Championships. Honkavaara acted as the head coach of the Finnish men’s national ice hockey team in four Ice Hockey World Championships and as an assistant coach in three World Championships and at the 1964 Winter Olympics in Innsbruck.

Honkavaara was one of the pioneers of Finnish ice hockey. His statistics in the Finnish Elite League are unsurpassed: 62 games, 143 goals, 61 assists. In the Finnish national team, Honkavaara made an amazing 46 goals in 47 matches.

During his coaching career, Aarne Honkavaara was awarded two Rolex trophy watches. He received the first one in 1964 when the Finnish national ice hockey team won the Fair Play Cup at the Innsbruck Winter Olympics. Rolex, which sponsored the event, awarded the winners of the Cup with a Rolex Oyster Perpetual Date ref. 1500  chronometer watch.  The watch came with a riveted Rolex ref. 7835/57 steel bracelet. The watch came in a light green Rolex box that also contained a C.C.M Art Ross Hockey League Puck, a wooden miniature hockey stick and a red Rolex chronometer tag. The winners also received the Rolex Fairplay Cup silver trophy.

In 1965, Finland won the Fair Play Cup of the Ice Hockey World Championships held in Helsinki. Rolex was still a sponsor, and the trophy watch was similar to the one awarded in Innsbruck, a Rolex Oyster Perpetual Date, ref. 1500. The watch came with a riveted Rolex ref. 7205/57 steel bracelet  and an original Rolex Fairplay Cup box. The box contained a Tyer Rubber Company, Art Ross Hockey League Puck, a miniature hockey stick and Rolex tags.

IIHF first introduced the Fair Play Cup prize in Austria in 1927. It was awarded to the team with the fewest penalty minutes in the tournament. The first Fair Play Cup prize was given to the Belgium national ice hockey team in 1927. Rolex was the Cups sponsor for several years.